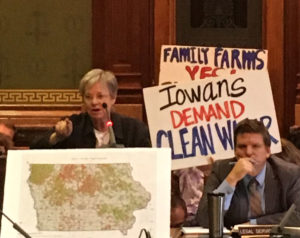 A speaker at the EPC hearing.

Members of the group immediately voiced their anger after the Environmental Protection Commission’s vote.

“This is not over,” the group chanted in the commission’s meeting room. “We will keep fighting.”

Regulators determined they lacked the authority to adjust the so-called “master matrix.” Those are the rules that govern where livestock confinements may be built. 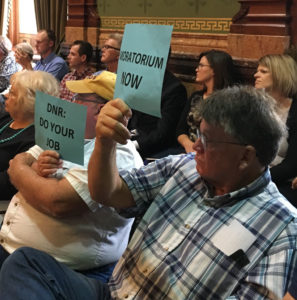 Members of the crowd at the EPC meeting.

Commission member Joe Riding of Altoona, a former legislator, said the law establishing those standards was passed 15 years ago and it’s time for the legislature to revisit the issue.

“Bringing the stakeholders together,” Riding said. “I don’t care how messy it might be.”

Commissioner Barbara Hovland of Mason City agreed that it’s up to legislators to review the law.

“I am a firm believer that they created it and they need to start discussing it,” Hovland said.

A lengthy period of public comment came before the commission’s 8-0 vote. Farm groups like the Iowa Pork Producers argued the proposed changes would create a mortatorium on new construction of livestock confinements.

Farm Bureau member Brianne Streck of Moville said she and her husband “work hard to raise livestock the right way.”

“The supporters of this petition would like to make you think that I am the face of evil,” Streck said. “…Changing the master matrix to give others the ability to pick and choose where and how we can raise livestock would be detrimental to young farmers like me and, more importantly, the rural communities that live and thrive on us.”

Backers of the petition argued Iowa is making little progress in cleaning up polluted waterways and it’s time for tougher rules on livestock manure.

“Why is there even a question? Why is it farmers first, the rest of us go to hell — excuse my language,” said Iowa CCI member John Lichty of West Des Moines. “I’m not against farmers, but…it’s all about profit. Money first, the heck with the rest of us. That’s all I’ve got. This is disgusting.”

In 2002, the Iowa legislature passed a law establishing statewide standards for livestock confinements, including the required distance between a confinement and a neighbor’s house. A state construction permit is required for confinements of a certain size.

The Des Moines Register recently reported the Department of Natural Resources reviewed images from satellites and found 5,000 previously unknown confinements in Iowa. About 1,300 of them were large enough to require some form of state oversight.