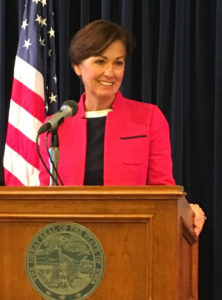 As Republican Kim Reynolds campaigns for a full, four-year term as governor, she is highlighting the work of the first Republican-led state legislature in 20 years. It’s all work that turned into the laws Terry Branstad approved before resigning and handing the governorship over to his lieutenant governor in late May.

“Promises made and promises delivered,” Reynolds said Saturday. “This past session we seized the opportunity to build on the success over the past six years, to build on the policies that we put in place to strengthen the economy, to improve our quality of life and to streamline and shrink our government.”

Today is the 118th day Reynolds has been governor. Branstad signed into law all the bills passed by the 2017 legislature before he resigned on May 23.

“Hardworking taxpayers, they found a place at the table,” Reynolds said. “We made it more affordable to own and operate a business. In fact, it was the most pro-jobs legislative session in two decades.”

Reynolds was among the speakers at this past weekend’s Iowa Faith and Freedom Coalition fundraiser in Des Moines.

AFSCME Council 61 — the union that represents the largest share of state workers — weighed in on twitter. A tweet advised the labor movement to “pay attention” to what Reynolds was saying and accused her of “bragging about what was done to Iowa workers” by the 2017 legislature.

Iowa GOP chairman Jeff Kaufmann, another speaker at Saturday’s event (audio here), praised the Republican legislators who were in the crowd.

About 600 Christian conservatives attended the event, which was held in Des Moines.