You are here: Home / Fires/Accidents/Disasters / Fog a factor in death of garbage truck driver in Benton County accident 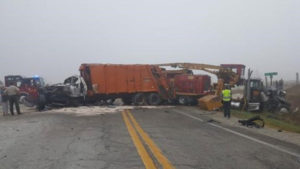 The driver of this garbage truck died in an accident in Benton County. (KCRG photo)

Fog played a role in a fatal crash this morning in eastern Iowa’s Benton County.

The crash happened around 7:30 a.m. at an intersection on Highway 150 north of Vinton. The Benton County Sheriff’s Office reports the driver of a garbage truck was killed after pulling out in front of a hay grinder semi truck.

Two other people were thrown from the garbage truck.  There’s no word on the extent of their injuries. Two people in the semi were not injured.

Investigators say there was heavy fog in the area at the time of the crash.