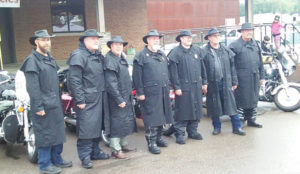 Seven motorcyclists from the Sioux City area took off Monday on a 5,000 mile journey with plans to raise $50,000 for the Unity Point St. Luke’s Children’s Miracle Network.

Steve Schmidt is taking part in the ride.

“What a great cause to help the youngsters of Siouxland,” Schmidt said. “I love to ride and I know a lot of people, so I can help with the fundraising.” Schmidt, who rides 10-to-15-thousand miles a year on his motorcycle, has been with Security National Bank in Sioux City for 36 years. He and the other riders traveled to the Chicago area on Monday. Today, they’ll make their way to historic U.S. Route 66.

“Then we go down through Missouri, Oklahoma, Texas, New Mexico, Arizona, we touch a little bit of Nevada, and then into southern California where it ends in Santa Monica,” Schmidt said. Woodbury County Sheriff Dave Drew is on the trip. He’s a fan of the band The Eagles and is looking forward to one particular stop.

“I’m gonna be standing on the corner in Winslow, Arizona, so I’m pretty excited,” Drew said. “We’re going through the Grand Canyon, Santa Monica, and some areas I haven’t been to. I’m like a little kid at the candy store.” The seven motorcyclists will be stopping at Children’s Miracle Network Hospitals to meet children and share their story along the way, hoping to raise $50,000 for CMN.

“That’s what this ride is about – to help Unity Point Children’s Miracle Network with buying some things that will help the nurses and help the parents with their sick children,” Drew said. “That was really the big reason I got involved.” The seven riders, who are each covering their own expenses on the trip, plan to return to Sioux City on September 29.