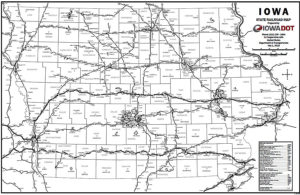 “It actually goes from Emory, Iowa to Clear Lake, Iowa. There’s a rail line up there that is doing some rehab. There’s a section of track that is currently being used to store empty cars and they are going to strengthen a couple of bridges on the rail line,” Hutzell says. The idea is create a place to unload freight and get it moving along the track.

“Open up some acreage west of Emory, Iowa that hopefully will be developed for some freight transloading and some industrial development there,” she says. There are no promised jobs tied to the Clear Lake project. The Sterilite Corporation in Davenport won a grant of a little more than one million dollars for some rail line access.

“Sterilite, which is the largest manufacturer of household plastics in North America is building an approximately two-and-a-half million square foot manufacturing and distribution center,” Hutzell says. “And they have an industrial park there — know as the Eastern Iowa Industrial Center — and that is where it will be located.” She says the money will pay for some rail improvements to help move the products.

She says they will build a spur track and a few turnouts to help meet the demand. Hutzell says there are around 100 jobs tied to the state funding. The Pattison Sand Company in the eastern Iowa town of Clayton was awarded a $700,000 loan and a $252,000 grant for rail service improvements.

“Pattison sand is Iowa’s only Frack sand producer. They had 21 jobs with this project. They actually applied to us last year as well….so this is phase two,” Hutzell explains. She says they will use the money to help move the sand.

“They are looking to do an addition of 3,300 track feed — adding approximately 75 rail car spots — as well as a rail scale to their site in Clayton,” according to Hutzell. The rail funding works similar to money given for roadway projects. If job creation is tied to the money, the companies have to prove they created the jobs.

Hutzell says they have around three years to fulfill the job requirements and they monitor the companies to see that they follow through. If they don’t create the number of promised jobs, they could have to pay back some of the money.