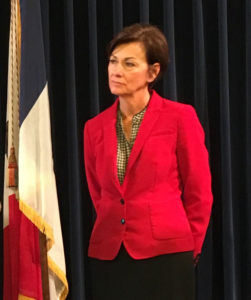 There’s likely to be a “big reveal” tomorrow at the statehouse. Governor Kim Reynolds has the authority to withdraw up to $50 million from the state’s cash reserves to cover expenses in last year’s state budget.

If the deficit is larger than that, Reynolds will have to call the legislature back in special session this fall to withdraw more.

The final accounting report on the budgeting year that ended June 30 is nearing completing, according to the governor.

“My Department of Management and Department of Revenue are finalizing the numbers and they will do a update tomorrow,” Reynolds told reporters late this morning during her weekly news conference (audio here).

Reynolds said the two officials will hold a briefing for reporters, but she will not be present. The governor’s budget director said in early July that his review of “cash receipts” indicated there was a $76 million deficit — and that would be reduced once all the bills owed to the state before June 30 were paid this summer and state agencies returned any unspent funds.