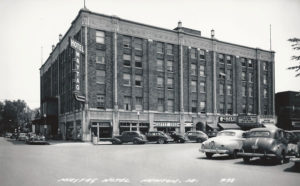 Photo of the Maytag Hotel featured on the Newton website.

The Newton City Council has sold the former Hotel Maytag to a private development group that plans to renovate the building. Newton City Administrator Mike Muckler says the investors plan to raise at least $10 million for the project.

The five-story Hotel Maytag is on the east side of the courthouse square in Newton. It was the first hotel west of the Mississippi to have air conditioning and among the first in the country to have radios in each room. The Hotel Maytag’s ballroom closed four decades ago, but its rooms were still occupied until last year, when the city bought the property.

Former State Senator Jack Hatch of Des Moines, the 2014 Democratic candidate for governor, has re-developed properties in Des Moines and Cedar Rapids and he leads the group working on the Hotel Maytag’s revival.

“Not only is it elegant in terms of its size, but at the time in 1926, it was really a gem in which the founder of Maytag appliance company — really the heart and soul of this community — built it to not only receive visitors but for local exchanges as well,” Hatch said.

The “Hotel Maytag Investors” group paid the city $400,000 for the property. The City of Newton has given the project grants totaling $2.75 million, plus a 15-year property tax rebate worth up to $360,000. Hatch says the second floor ballroom where locals say Judy Garland once performed will be restored. The hotel rooms will be turned into 45 apartments. Commercial space will be available as well.