You are here: Home / Health / Medicine / Flu cases starting to show up in Iowa 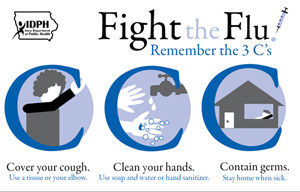 We are just heading into fall and winter is still weeks away, but cases of the flu are already showing up in Iowa.

Health Department Medical Director Patricia Quinlisk says they’ve seen a handful of cases and it’s a sign to begin preparing. “We’re starting to see people diagnosed with the flu and we’ve actually even had some hospitalizations due to the flu,” Quinlisk says. “So, it’s starting to pick up and we want to remind everybody that it’s time to go get your flu shot.”

Doctor Quinlisk says it takes up to two weeks after vaccination for the body to develop full protection against the flu virus — so it’s a good time to take the precaution before flu cases really get heavy. “It typically really doesn’t get going so that it’s really spreading in our communities usually until November and December — and then it really gets going in January and February,” according to Quinlisk. “But of course you never know when you are going to be exposed, so we want everybody to get their vaccine before they even have a chance of being exposed.”

Quinlisk says it’s too early to say how severe the flu season may be — but one indicator is the flu season in the southern hemisphere. “One of the things that we are seeing from places like Australia and New Zealand is that they had a really bad flu year. A lot of people got sick and a lot of people were hospitalized. And that often will predict that we will also have a bad flu year,” Quinlisk says. She says getting the flu shot is one way to lessen the impact of the flu.Quinlisk says the flu vaccine is meant to prevent people from getting sick and dying — but it doesn’t stop every sniffle and sneeze.

Quinlisk says the flu shot does keep the sniffles and sneezes from becoming more serious. “People can get the flu shot and still get the flu,” she says, “but the thing to remember is they probably would have gotten a lot sicker and perhaps even gotten hospitalized and died if they hadn’t been vaccinated. So, do get your flu shot, especially if you are in one of those high-risk groups.”

The high-risk groups include: pregnant women, children, adults aged 65 years and over, and people who have certain medical conditions like asthma, diabetes and chronic lung disease. Doctor Quinlisk says good hygiene also is important in preventing the flu.

“People don’t realize that you can pick up these viruses on your hands and then you rub your eye or touch your nose and spread it to yourself. So keep your hands clean. Soap and water is good,” Quinlisk says. She says the flu vaccine is plentiful and you shouldn’t have any problem finding a place to get vaccinated.