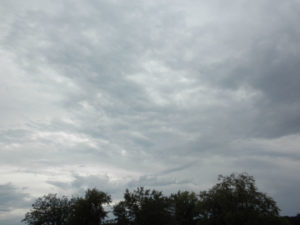 In a region of the state that’s been plagued by extremely dry weather much of the summer, some roads were closed this morning due to flash flooding, the result of multiple downpours overnight.

“We saw persistent thunderstorms in and around the Ottumwa area during the overnight time frame and saw several inches of rainfall,” Cogil says. “We had a few reports of people with personal rain gauges with around seven inches and even a little bit more, just to the south of Ottumwa.” Some areas of southeast and south-central Iowa had storm after storm roll through during the night, dumping more rain in a few hours than some communities have seen in more than a month.

Cogil says, “We did have a report or two of some deeper standing water, but overall, impacts have been somewhat limited just due to how dry it’s been prior to the heavy rainfall.” Several counties across the region were rated in recent days as being under moderate-to-extreme drought conditions, which ended up being a benefit in this storm system.

“It’s been so dry, in fact, Ottumwa had one of the largest deficits in the state before this event as far as rainfall is concerned this summer,” Cogil says. “A lot of the soil had the capacity to soak in a lot of the rain that fell overnight and the impacts aren’t as bad as what they normally would have been for such a rainfall.”

The forecast says a wide section of Iowa may see more scattered thunderstorms throughout the day, the last full day of summer. The autumnal equinox is tomorrow at 3:02 P.M.