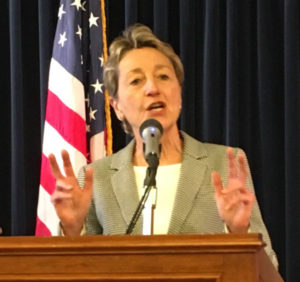 The mayor of a Des Moines suburb is urging other Iowa cities to pass ordinances that establish concrete rules for businesses offering massage services.

Johnston is just north of Interstate 80, with major commercial districts at the exits off the highway. The mayor says Johnston police first took the “traditional approach” of trying to catch people in the act of offering sexual services from a massage business.

“Knowing that even though we drove that first one out using that method, we would be vulnerable to the next one moving in to our community,” Dierenfeld said, “so we took a more proactive approach and we decided to pass an ordinance that would regulate these businesses coming into our community.” The ordinance, which was approved last summer, requires background checks and special licenses for massage businesses in Johnston.

Earlier this year, the legislature passed and Governor Branstad signed a bill making it clear cities have the authority to license massage parlors. A recent analysis concluded there are at least 45 established businesses in Iowa — and eight in the Des Moines metro — where sex is for sale. That number comes from an organization that went online and read the reviews posted by people who said they’d paid a sex worker in Iowa.

Earlier this week the City of Johnston got an award from the Iowa Network Against Human Trafficking and Slavery for its ordinance that tries to combat the issue.