You are here: Home / News / Reynolds: budget fix without special session ‘right thing to do’ 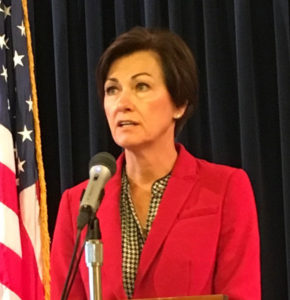 There will be no “special session” of the Iowa legislature this fall to discuss fixes to the state budget and the debate is now shifting to topics for the 2018 legislative session. Governor Reynolds announced yesterday she’d be able to cover the short-fall in last year’s state budget by withdrawing $13 million from the state’s economic emergency fund.

Reynolds said in July, she was getting “a lot of push” to have legislators reconvene to fix things.

“That was reckless and we took our time and we monitored where the revenue stood and it was the right thing to do,” Reynolds said during a stop in southwest Iowa on Wednesday.

The governor’s budget director said during a briefing at the statehouse that more than $70 million in money that was due the state by June 30th was actually paid in July. That whittled the deficit for the last budgeting year to a level Reynolds had the authority to erase on her own, without legislative action. Reynolds said it’s now time for policymakers to look at changing Iowa tax rates in 2018.

“I’m optimistic about Iowa’s future and the economy and we’re going to continue to put policies together that really build on what we’ve done the past six years,” Reynolds said, “so we can keep our economy growing.”

Reynolds made her comments during an appearance yesterday in Shenandoah. The candidates who hope to challenge Reynolds in 2018 as she seeks a full, four-year term as governor are lining up to question the state’s finances. Cedar Rapids Mayor Ron Corbett, the Republican running against Reynolds, said Reynolds needs to bring legislators back to Des Moines now to cut the current year’s state budget because tax projects are way off.

“But it looks like they’ve done the traditional ‘establishment’ solution and that’s borrow more money and hope that the problem gets better in the future,” Corbett told reporters at the statehouse. “Hope is not an economic strategy.”

State Senator Nate Boulton of Des Moines, one of the Democrats running for governor, questioned the governor’s approach, too.

“My hope would be that we won’t keep having these budget crises and I think a special session could have dealt with that,” Boulton said. “We have a cause and effect issue…We have an over-extension on corporate tax credits, exemptions and give-aways.”

The state is now providing businesses more than half a billion of tax breaks that Boulton says should be examined. Boulton was at the statehouse and talked with reporters yesterday who’d been in the governor’s office for a budget briefing.