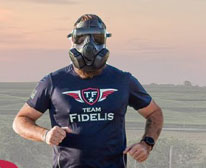 The “Masked Veteran” has completed his 330-mile statewide journey, crossing the finish line at the Burlington riverfront on Friday night.

Joshua Jorgensen started his trek in Council Bluffs late last week as a way to call attention to veteran suicide and post-traumatic stress. Jorgensen, who is from Adel, says the toughest part of the run wasn’t the running.

“Dealing with myself for 12 to 14 hours a day out there on the road — you know your mind can play some really funny games with you, especially in the heat and rain,” Jorgensen says, “and I dealt with both.”

Jorgensen is an Iraq war veteran. He wore a gas mask as he ran, to symbolize the struggles many veterans face every day.

“I did this to show that you can step up and you can become a leader,” Jorgensen says. “You can get people to follow you in creating that awareness. Get involved in local organizations. Get involved with your fellow veterans.”

It took Jorgensen 10 days to run across the state. Jorgensen covered between 30 and 40 miles each day. Jorgensen is a member of Team Fidelis, a national organization focused on the mission of preventing suicides among veterans. A few other members of the group ran beside Jorgensen during the final miles of his journey.