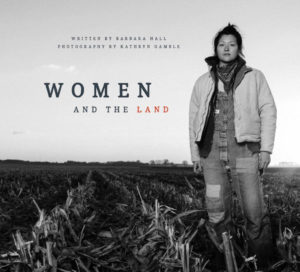 A book created by two central Iowa women is arriving on book store shelves this week that focuses on the stories and images of 25 Iowa women who are farmers, farmland owners or both.

The 96 page “Women and the Land” was written by Barb Hall, and Kathryn Gamble shot all of the pictures. Gamble, a commercial photographer based in Des Moines, says this project immediately captured her curiosity.

“When I think of ‘Iowa farmer,’ I think of old white guy in overalls,” Gamble says. “And I thought, ‘Oh, so women. Who are these women? What do they look like?’ It was purely of visual interest for me.”

A recent survey found 51 percent of Iowa’s land is at least partly-owned by women, while 40 percent of the state’s land has a female landlord. Of the two-dozen-plus women featured in the book, some are working the land directly or with their families, while others inherited the property and manage ag practices from afar. 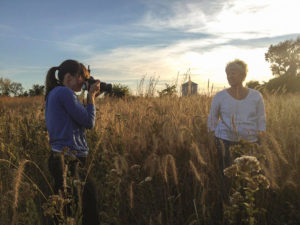 “A couple of them are landlords so someone else is farming their land, but they are having a say in how that land is farmed,” Gamble says. “A lot of the women who are featured are very involved in various organizations or have even been the ones who have started organizations either for women or about land conservation.” Born in the Chicago area and raised in Atlanta, Gamble lived for years in New York City before moving to Iowa in 2005. She says her perspective about farms and farming has changed since then, especially since starting work on this book, her first.

“It made me fall in love with the state of Iowa even more and it’s just so beautiful,” Gamble says. “We would have to drive two-and-a-half hours away and I was dreading the drive to get to this farm, but inevitably, it always just amazed me at how beautiful the landscape was.”

Gamble and Hall will be holding their first book signing on September 29th at Beaverdale Books in Des Moines. The book was published by Ice Cube Press, based in North Liberty.