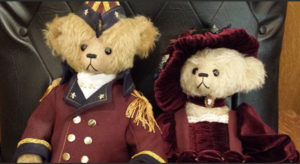 A north-central Iowa man who brought joy to people around the planet through the fuzzy stuffed animals he designed and created is being remembered at a new museum in the region.

Steve Schutt was an art teacher from Clarion who started making teddy bears in 1980 and developed such a skill, that his bears became high-demand items. Melody Lager is spokeswoman for the Heartland Museum in Clarion.

“Steve Schutt was a very well known artist, teddy bear artist, throughout the United States and the world,” Lager says. “He created a lot of teddy bears for Boyds Bears and we have a lovely display of bears that he created here in the museum.” Schutt died in March at age 66.

The Iowa Teddy Bear Museum is located within the Heartland Museum, which was dedicated in Schutt’s honor last week. Visitors can learn about the history of the childhood toy — which was named after a president — and see examples of teddy bears from Iowa and from around the globe.

“We have several large window displays filled,” Lager says. “We also have vignettes, smaller teddy bears doing different things like teddy bear picnics and teddy bears resting at home.” A large gathering of teddy bear collectors, called the Teddy Bear Reunion, was held in Clarion four times over the years, most recently in 2010.

The museum is open the two remaining Saturdays in September and by appointment.