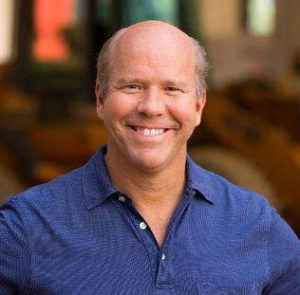 A Maryland congressman who is the first official Democratic presidential candidate for 2020 says his party must “start talking about what people really care about.”

“Their jobs, the dignity of work, their pay and their opportunity for their children — that’s what people overwhelmingly care about,” John Delaney told Radio Iowa Sunday evening. “The Democratic Party has to be the party that stands for those things.”

Delaney has served three terms in the U.S. House, but is not seeking reelection in 2018. Instead, he plans to visit Iowa twice a month over the next year and make trips to the other states that host early voting contests in the next presidential election. He campaigned in South Carolina Saturday, then flew to Iowa for an event in Audubon late this afternoon.

“The reason I entered this race so early is I think the Democratic Party has to have a very important conversation about our future and how we start winning elections,” Delaney said, “and I think I’m the person to, ultimately, lead that conversation, but really what I need to do is listen to people, make sure I’m focused on what they care about and give people an opportunity to get to know me.”

Delaney, who is 54 years old, is a former banker who founded two companies. His net worth is in the neighborhood of $90 million according to the Associated Press. During his first campaign for congress in 2012, Delaney promised voters he’d bring “the perspective of an entrepreneur to a gridlocked congress.” Delaney’s prescription for the Democratic Party in 2017? Figure out how to appeal to Americans who’ve been “left behind by the pace” of economic change.

“In the last election, we kind of created the wrong villain,” Delaney told Radio Iowa. “The villain, they said, was globalization, but in reality it was government’s failure to respond to changes that were ultimately positive for the economy, but they weren’t positive for everyone and we watched it happen and we did nothing about it.”

Other, better-known Democrats in the U.S. Senate have united behind a bill calling for a single-payer health care system and many in the party consider Trump’s 2016 triumph a call to action. Delaney, considered a moderate in the party, does not label Trump as the “villain.” During his meeting with Democrats in Audubon, he didn’t mention Trump’s remarks about NFL players taking a knee during the National Anthem. Delaney told Radio Iowa that Americans are looking for “civility” in their politics and “bipartisanship,” but he considers competence the more pressing concern.

“The Democratic Party has to be the party of good government,” Delaney said. “We need to be the party that actually gets government working again for the American people…They want to start believing in their government again because it’ll help them believe more in themselves.”

Delaney was in Iowa last month and visited the Iowa State Fair, a traditional stop for politicians with White House ambitions. Tomorrow at 8 a.m., Delaney is scheduled to be at Duncan’s Cafe on Main Street in Council Bluffs to greet and talk with breakfast-hour customers.