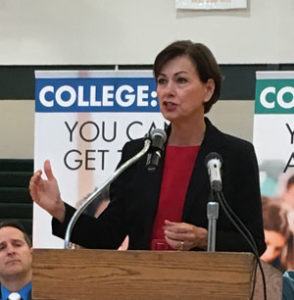 Governor Kim Reynolds today said it’ll be at least three months before she decides what state funding recommendation she will make for the three state universities.

“My number one priority — and it has been all along — is to make sure that we keep higher education affordable,” Reynolds said.

This summer, the presidents of the University of Iowa, Iowa State University and the University of Northern Iowa said unless there’s a state funding increase, tuition must go up at least seven percent. During her weekly news conference this morning, Reynolds repeated her opposition to a seven percent tuition hike and she called upon the board that governs the universities to avoid such a dramatic move.

“They need to look for efficiencies that they can provide within each one of the universities,” Reynolds said, “and then put forth a reasonable increase that is not detrimental to families across the state of Iowa.”

The Board of Regents is asking Reynolds and the legislature to boost state funding levels for the state universities by $12 million for the next budgeting year. A three-member panel will meet in December to set its official estimate of state tax revenue for the following year. By law, Iowa governors are to use that estimate as the basis for their next state budget plan. Reynolds said that’s why she can’t comment today on the Regents’ request.