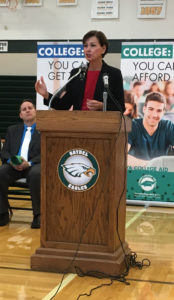 Iowa Governor Kim Reynolds this morning said professional athletes who have taken a knee as the National Anthem is played before sporting events are being “disrespectful,” although Reynolds is not joining President Trump is calling for the players to be fired.

“I would encourage them to, maybe on their own time, go out and make a difference, get involved, get engaged. That’s what I think,” Reynolds said. “I don’t think it’s teaching our young people. I mean, they look up to these individuals and I just think it’s important that we respect the flag and what it stands for.”

Reynolds, a Republican who has been Iowa’s governor since late May, made her comments this morning during her weekly news conference. Reynolds answered three questions fro reporters about this weekend’s “take a knee” movement.

“Don’t take a knee. Get out there and make a difference. Engage. Go into these cities. Run for office. Support a candidate that you think stands for your beliefs,” Reynolds said, “but let’s not disrespect the men and women who have served to allow us to have the freedom and liberties that we enjoy each and every day.”

Most NFL players linked arms as a show of unity Sunday as “The Star Spangled Banner” was played before kickoff of their games, although dozens did kneel. This morning, President Trump said fans in the stands who booed the kneelers “demand respect for our flag!” Reynolds told reporters she was taught to stand and place her hand over her heart during the National Anthem and she’s encouraging professional athletes who are kneeling to find another way to protest racial inequality.

“While I respect the First Amendment, I just think it is so disrespectful to the men and women who have served,” Reynolds said.

AUDIO of Reynolds’ remarks on the subject