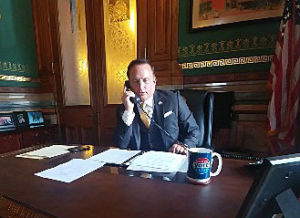 Secretary of State Paul Pate today said it was no surprise to him when federal officials last Friday “confirmed” Iowa’s voter registration system was “targeted by a Russian entity” before the 2016 election.

“That’s how they really knew it — because we reported it to them,” Pate said, adding an “alarm” went off in Iowa’s system when the attempt was made. “When we have bad actors, we share those names with both our state and federal experts in the homeland security area, so they were just getting around to calling the 21 states and letting them know that we were one of those.”

Pate said Iowa’s voter registration system “has not been compromised.”

“The good news is we repelled their attack as we do thousands of others every day,” Pate said during a phone interview earlier this afternoon.

According to Pate, the state’s chief technology officer has indicated there are about 600,000 hacking attempts every day that are directed at the State of Iowa’s websites.

“Most of these hackers and even the foreign governments are looking for the low hanging fruit,” Pate said. “They’re going on to the more public websites, thinking they can find a window or door to get into the more sensitive material and we don’t do it that way. If you go into our website, you can hack all you want. The worst you could do is change some phrasing around, maybe, in my website, but you’re not going to access any of our voter data or any of our business files, so that’s why they aren’t successful, frankly.”

However, Pate said he  plans to remind legislators it’s important to spend money upgrading the technology so state officials can stay one step ahead in what Pate called “this cloak and dagger game.”

Photo courtesy of the Secretary of State’s office.