You are here: Home / Business / Rock band talks to students about financial literacy after performances 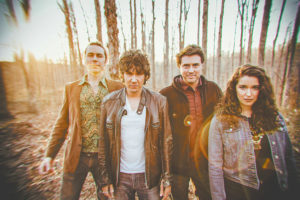 A touring Midwestern rock band will play concerts at three Iowa high schools in the next week or so, shows that will be immediately followed by frank talks from the band’s frontman about financial literacy.

Steve Gooding, co-founder, guitarist and singer in the band Gooding, says after the music ends, the lessons begin about debt, stocks and savings accounts.

“This is an organic thing that grew out of us just realizing some mistakes we made,” Gooding says. “I’ve got a mic and I’m lucky, I’d better use it. We’re trying to find common denominators to keep kids out of trouble later in life. We are rock-n-rollers, brother, we are not financial advisors. This is just something we realized maybe could make a little bit of a difference.”

Gooding, a Wichita, Kansas native, says “the music helps the medicine go down” and most kids are receptive to hearing what he has to say about money.

“I tell them about not knowing what a credit score was until I screwed mine up,” Gooding says. “I tell them I knew more about geometry than how to balance a checkbook when I left high school. I have them raise their hands: Who wants to buy a car? Who wants to buy a house? Who wants to get married? Of all these things, I show them the stats on financial literacy being as important to achieving these things as anything else they’re going to learn in school.”

While it appears some athletes and celebrities become wealthy overnight successes, Gooding says that’s just a myth he debunks with his concerts. “We play rock-n-roll as wild and crazy as we can and we show them a little film, some of the people we’ve met in the music business, and then I come out and actually try to deconstruct that very same thing, by saying, ‘Look, I was a kid that thought some record deal was going to fix all my problems, but you have to go slow and steady,'” Gooding says. “If you’ve got a dollar in your pocket, you have more money than some of these famous people. They go up fast and they go down just as fast.”

The band Gooding is scheduled to play on Thursday (September 28th) at Underwood High School in the western Iowa town of Underwood, and next Tuesday (October 3rd) at both Norwalk High in Norwalk and Ballard High in Huxley in central Iowa. The tour is sponsored by the Iowa Insurance Division in partnership with the non-profit group, Funding the Future.