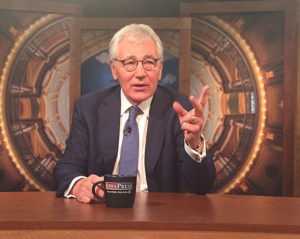 Chuck Hagel, the former Nebraska senator who served as President Obama’s first defense secretary, today said there is “really no military solution” to the stand-off with North Korea.

“I think the wiser course of action is to continue along the diplomatic front,” Hagel said. “I think in many respects the Iranian nuclear agreement which I helped put together probably is the eventual course that we’re going to have to follow here.”

President Trump and Republicans in the senate have criticized the Iranian nuclear deal. Hagel counters that the U.S. and five other countries “got a lot out of it” by getting inspectors inside Iran to get a clear picture of the country’s nuclear capability and the same could happen with a multi-nation accord with North Korea.

“This bravado of military attacks and military action, these are almost always from people who know nothing about war,” Hagel said, “starting with the president of the United States.”

Hagel, who is a Vietnam veteran, will deliver a lecture at Simpson College this evening. This morning, he taped an appearance on Iowa Public Television’s “Iowa Press” program. Hagel repeated his criticism of President Trump’s use of Twitter and the “baiting” of North Korea’s leader by calling him “Rocket Man.”

“I think it’s irresponsible,” Hagel said. “I think it’s immature and I think, quite frankly, it’s a sign of a certain amount of insecurity.”

Hagel –who said he is “still a Republican” — argued his party is moving in a “dangerous” direction under President Trump.

“Yes, I would support somebody else other than President Trump,” Hagel said. “…There are going to be a lot of Republicans emerge and others and who knows what the world looks like next week in the Republican Party, but there’s a fundamental change going on and we need to go through it and we’ll be better when we get to the other end of it.”

According to Hagel, the Republican Party must again by “pro-trade and pro-engagement” because, Hagel said, “we need friends” around the world.

Hagel’s appearance on “Iowa Press” will air at 7:30 p.m. this Friday on Iowa Public Television.