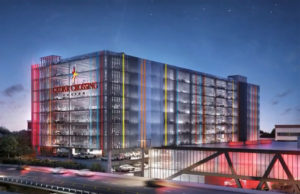 A rendition of what 1 of the 3 proposed casinos for Cedar Rapids will look like.

The Iowa Racing and Gaming Commission will begin the final steps in deciding whether a new gambling license is awarded to Cedar Rapids today.

Racing and Gaming administrator, Brian Ohorilko, says the commission will  be in the city for its meeting and they will visit all three sites. Ohorilko says the meeting will also include more public input on the casino proposals.

“Those site visits will last approximately 45 minutes each and will take the good part of the morning,” according to Ohorilko. “At one o’clock…the commission will get a chance to hear from the general public.”

The next step is for commissioners to learn more about the gambling market as they  hear from the vendors who are doing a market study on gambling at the October 12th meeting in Emmettsburg.

There will be a vote the following month. “The last meeting of the year is on November 16th, that meeting is at the Diamond Jo Dubuque. A decision will be made at that time regarding the Linn County applications,” Ohorilko says.

Two groups put together the three casino proposals. The Cedar Rapids Development Group presented the commission with the same casino project that got rejected in 2014, known as Cedar Crossing on the River. It’s other proposal is a smaller casino known as Cedar River Central. The Wild Rose casino development group presented the other proposal that is a smaller casino that the group says would not hurt existing casinos in eastern Iowa.