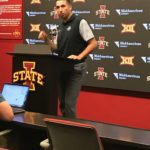 Thursday nights have been kind to Iowa State over the years and the Cyclones hope that continues when they open the Big-12 race at home against Texas. ISU is 10-4 on Thursday nights and a national television audience will also provide an opportunity to showcase the program.

“It is magical and special and the thing this does is it opens the curtain to Iowa State”, said Iowa State coach Matt Campbell. “This is why you go play the game and I think the best advantage we have is that we are playing at home.”

The Cyclones have displayed balance on offense in a 2-1 start that has seen them average more than 40 points per game. A key will be getting running back David Montgomery going against a stout Longhorn front seven.

“I am sure we will have a nice balance and I know our coaches have got a good game plan going in”, said Cyclone quarterback Jacob Park. “But if we have got to throw it 50 times we will throw it.” 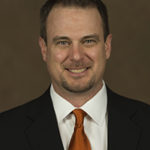 Former Cyclone assistant Tom Herman is in his first season as Texas coach. The Longhorns are 1-2 after a double overtime loss at USC. Herman spent three years at Iowa State and knows the Cyclones and the crowd will be ready for this game.

“Anytime a big name comes into town that place is rocking”, said Herman. “It’s a really neat college football atmosphere and I would imagine it will be much of the same on Thursday night.”

Texas leads the all-time series 12-2 but in their last visit to Ames in 2015 the Longhorns were blanked 24-0. Kickoff in Jack Trice Stadium is 7:00p.m. The game will be televised by ESPN.