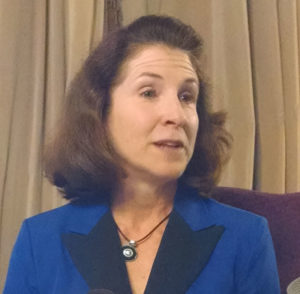 A special investigation by the State Auditor has found a tangled mess in the clerk’s office in the Emmet County city of Armstrong.

Auditor Mary Mosiman says what started out as an audit for the 2016 fiscal year changed after they couldn’t access records and the city raised questions bout money deposited to its account.

“And in that point in time the sheriff’s removed various financial records from the city hall. And so because of the concerns that had been identified, and the confusion regarding the we determined it would be proper for us to perform a special investigation,” Mosiman explains.

Mosiman says the city’s computer system had crashed and they have few records to go on, but were able to piece together some things. “Our procedures identified $88,600 of estimated utility collections which were unbilled or not properly deposited,” Mosiman says, “and a little over $11,000 dollars of improper disbursements. And then we also identified a little over $575 of unsupported disbursements. And the total impact to the city was $100,650 dollars. Mosiman says they had trouble tracking down information on the city’s utility collections.

“During our period of review we could only locate one month, and of that particular month, three of the 17 billing registers from the report did not agree or reconcile with the amounts that had been recorded in the meter reading logs,: Mosiman says. She says no water bills went out to the city’s 900 residents in June after the city’s computer system crashed. Mosiman says many of the city’s records were lost because the city didn’t have the company that was doing a software update back up their records before the computer system crashed.

Mosiman says in one case they found cash in the clerk’s office from a memorial donation that had been made five months earlier and never deposited. She says the lack of records made it hard to tell what was happening with Armstrong’s finances.

“We cannot tell that money was actually missing. We do know money was not appropriately billed to the city residents. And we certainly know that some of the collections were not properly deposited,” Mosiman says. “We could not come up with an explanation from the city folks why there would be such a wide variance between one month’s utility deposits and another month’s utility deposits.”

Armstrong City Clerk Connie Thackery retired in February 2016 and Kate Staton took over , so they were overseeing the records for the fiscal year that ended in June of 2016.

Mosiman says her office made several recommendations to the city to tighten its financial controls. She says they turned over copies of their findings to the Emmet County Sheriff’s Office, the Division of Criminal Investigation, the Emmet County Attorney’s Office, and the Attorney General’s Office, which is standard procedure for these investigations.