You are here: Home / Education / ISU study finds a TV in the bedroom might hurt a child’s school performance 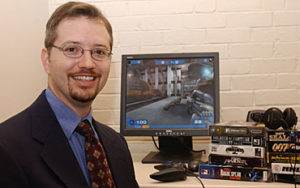 An Iowa State University study shows the negative consequences of children having a TV or video game console in their bedrooms.

“Having a TV in the bedroom might decrease school performance not because of what it’s doing, but because of what the kids aren’t doing,” Gentile says. “They’re maybe doing less homework or less reading or getting less sleep, and so it’s displacing other things.”

Gentile says this can increase a child’s risk for exposure to violent media, obesity, video game addiction and physical aggression. That’s often because it’s harder for parents to monitor a child’s digital activities if they’re taking place behind closed doors. He says allowing children to have digital devices in their rooms doesn’t change the effects of spending more time with screens.

Gentile says, “Basically it’s adding a turbo-charger to effects that already happen from the amount of time kids spend with screens or the types of things they watch.”

These findings likely also apply to kids who bring handheld devices, like iPads, into their room. Keeping screens out of a child’s bedroom will benefit them in the long term, he says. Gentile made his comments on the Iowa Public Radio program, “Talk of Iowa.”