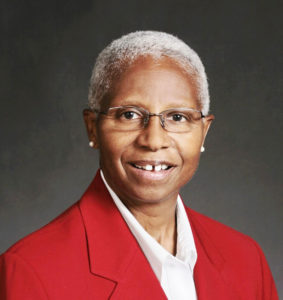 An Iowan known by her fans as “Miss Kittie” is still competing in off-road bicycle races at the age of 67. Kittie Weston-Knauer is the oldest female rider on the BMX cruiser circuit in the United States. She has no plans to retire.

“What I want to be able to do is to know that there’s quality in my life and this sport provides that for me,” she says. “It’s not just about getting on the bike and riding, but now I find myself in the gym and I’m in the gym because I’m continually having to develop my core strength and my core stability.”

She also admits to being “extremely competitive.”

“I’m really competing against myself and I do that because I want to continue to enjoy what life brings to me,” she says. “Back in ’93 I fell off my bike and broke my neck and ended up paralyzed and I had to learn how to crawl all over again, how to walk all over again.”

Weston-Knauer was in her early forties when she started racing on off-road tracks. Weston-Knauer’s son challenged her to quit giving advice from the sidelines and get on the track.

“My very first race was a Mother’s Day race in Marion, Iowa, and I borrowed my son’s helmet, his gloves and his bike — all of which were too small for me because, mind you, he was only 11,” Weston-Knauer says. “But I got out there with the other moms. I didn’t win that race, but I had a whole different look at what BMX racing was about and a whole lot more respect for the youth and men who had been racing.”

Back then, “Miss Kittie” and just one other woman in the U.S. over the age of 40 were racing bikes with 24-inch wheels — and they were competing against male riders. Now, Weston-Knauer is one of about a thousand women in BMX races.

“You are looking at a track that has a starting gate and up to a total of eight people at the most can be on that gate at one time,” she says. “That starting gate has a downward slope and you take off from the gate and you will do a total of anywhere from 1000-1300 feet on a track.”

Each track has at least three rounded curves as well as a series of hills.

“Sometimes those little hills will send you flying,” she says. “I’ve learned over the years to not fly over hills.”

Weston-Knauer has had both knees and both hips replaced, but she’s gotten right back on the bike.

“Even as a kid, I was always riding my bicycle,” she says. “After I graduated from college, I bought a bike and I used to work…so for me cycling was just fantastic and I had more than one type of bike. I was doing the mountain biking. I was doing the road bike. I even did some racing and so when this new challenge came along, it just kind of fell into line with what I was already doing.”

Weston-Knauer is a retired principal who worked 33 years in the Des Moines public school system. She made her comments during a recent interview on Iowa Public Radio’s “Talk of Iowa” program.