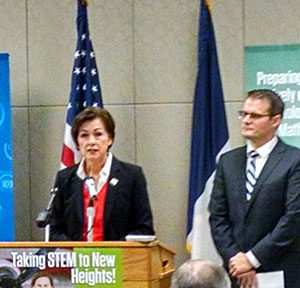 Governor Kim Reynolds pushed back today on statements made by the Democrat State Treasurer Fitzgerald on the settlement of a harassment lawsuit with a former employee of Senate Republicans.

Reynolds was asked about Fitzgerald’s comments that he was disappointed with the way the governor handled the situation and that she did not ask the top Senate Republican leader to resign.

“First of all, let’s stop taking incidents like this and making it a political issue. This is ridiculous. Sexual harassment is not to be tolerated and I have been extremely clear about that. No one, no one, should have to work in an environment that is not safe,”Reynolds says.

A Polk County jury awarded the former Senate staffer Kirsten Anderson $2.2 million in July, and the State of Iowa announced last week it had reached a settlement that would pay her a little more than one million dollars, along with $705,000 in legal fees.

The governor says she has been clear on the issue. “I have said over and over we have a zero tolerance policy,” Reynolds says. “We have procedures and policies in place that if somebody feels that have been impacted in this manner, they have a procedure that they are able to go through and they are able to get answers. That was unacceptable — what happened in that caucus — and it’s not to be tolerated. I have made that clear from the word go.”

She says they need to focus on the issue at hand and says politics shouldn’t even be involved. A reporter asked again is Senate Republican Leader Bill Dix should resign. “I am not going to tell them what to do, I have said that we have a zero tolerance policy,” Reynolds responded.

The reporter then asked Reynolds if the taxpayers should pay the settlement amount in the lawsuit, or if Republicans should pay. “You need to talk to the Attorney General’s Office, they have represented them, that’s a question for the AG’s office. I am not going to get into the middle of that,” Reynolds says. Reynolds made her comments during her weekly meeting with the media.