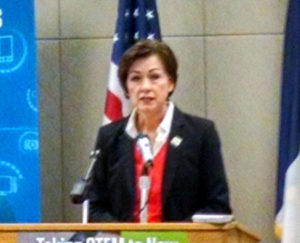 Iowa Governor Kim Reynolds spoke about the Las Vegas shooting as she opened her weekly meeting with the media today.

“Nobody wants to wake up at five o’clock in the morning and read the news that we all got up to this morning. (I was) just sickened by the horrific act that took place in Las Vegas,” Reynolds says. Reynolds says everyone needs to think of those who are dealing with the tragedy.

“Our thoughts and our prayers continue to be with the victims, the families and our men and women who are investigating this just senseless act,” Reynolds says. She says her thoughts and prayers go out to the Governor of Nevada as the investigate and deal with the shootings. Reynolds was asked if Iowa’s Department of Public Safety is ready if something like this would happen.

“I don’t know if you can completely — but they are ready — they run table tops and they run exercises, they run communications with all aspects of law enforcement, the National Guard, and the emergency management agencies that are in every single county,” Reynolds says. The governor was asked if the Las Vegas shootings raise any concerns about similar events in Iowa.

“You can’t quit living. You know, that’s what they want,” Reynolds says. “We have to continue to live our lives and we have to continue to work as a community and with our law enforcement, our E-M-S, our Emergency Managements and Homeland Security As Iowans we all have a responsibility to be vigilant, to recognize what’s going on in our communities and around us.” She says she meets monthly with the Department of Public Safety to talk about issues and says that will continue and events should go on.

“You just don’t stop living life, that’s not what we want or I don’t think should expect to happen either,” according to Reynolds. The Governor encourage Iowans to keep the shooting victims and those dealing with the shooting in their thoughts and prayers.