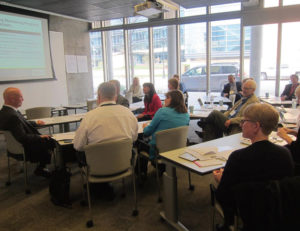 Deaths from prescription painkiller abuse in Iowa continue to rise, but a new report outlines policy recommendations for reversing the trend.

The report’s coauthor, Carri Casteel, says 38 people from a variety of backgrounds launched the effort earlier this year during a “stakeholder meeting” in Des Moines.

“We started that with an understanding of what Iowa was already doing in terms of policies and programs and then tried to fill in any gaps that we may have missed,” Casteel said. “Talking about, this is where we are, this is what we have, where do they think we should move forward?”

Casteel is an associate professor of occupational and environmental health in the University of Iowa College of Public Health. She says Iowa’s prescription opioid overdose death rate is lower than many other states, but has still quadrupled in the past 20 years.

“Even though our death rates may not be as high, they’re still following national trends,” Casteel said. “In a sense, that puts Iowa in a pretty good position to be maybe a little more proactive before we do become a state that has very high overdose rates, like West Virginia for example.”

Casteel will present the report to a legislative committee later this month. That committee will make recommendations to the governor and general assembly in November.