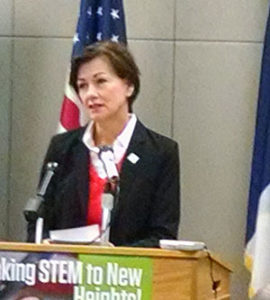 Reynolds was asked about recent suicides in the central Iowa area and what was being done to improve mental health services.”Well, I am willing to do what we’re doing every single day and that is to continue to look at the system and to never be satisfied with the status quo,” Reynolds says. “You know I am a mom and a grandma. I can’t imagine losing a child and dealing with some of the issues Iowans are dealing with that have mental health challenges.”

Reynolds paused in her comments and said it has been an emotional news conference, talking about the Las Vegas shootings and this issue. She says new Department of Human Services director Jerry Foxhoven is continuing to work on the issue.

“We’re doing what we can and we’re working every day to make it better. And we’re taking steps in the right direction — we’re going to continue to work on it, to continue to make it better, and that’s a promise that I can make as a governor of this state with a lot of great people working,” Reynolds said. “Our state employees want to do the right thing that work in that department. And Jerry is actually reaching out to them and saying ‘what do we have on your plate that we can take off, our there things that we can do better to help you focus on the things you need to do?'”

Reynolds says they are trying to improve an “antiquated system” through the mental health regions that they have put into place.