You are here: Home / Education / Report released on STEM progress in Iowa 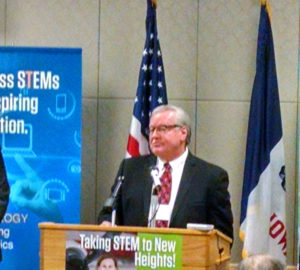 The Governor’s STEM Advisory Council shared the results from its 2016-2017 independent evaluation Monday and reports that they are making progress in advancing STEM (Science, Technology, Engineering and Mathematics) education across the state.

The president of Accumold in Ankeny,Roger Hargens, is co-chair of the STEM Council. “It’s really interesting to know that nine out of ten Iowans see STEM as a priority — that means that they are engaged — which we are really interested in seeing that. Parents need to understand that there’s great careers with STEM education,” Hargens says.

He says the annual report shows that the growth in STEM jobs across Iowa is outpacing other occupations and there are more than 12,000 vacancies. Hargens says some of those jobs are at his company.

“My message here is to become involved, we want parents, education involved. We’ve really got to look at this as an economic development tool, not just an economic undertaking,” according to Hargens. The executive director of the STEM Advisory Council, Jeff Weld, showed a chart that detailed some of the changes in stems jobs across the state beginning in 2011.

He says there were 300 professionals working in the STEM network in 2001 to well over 700 in 2017 working in the Stem network. Governor Kim Reynolds says the state needs to continue working with the STEM Council as it is showing results.

She says they want to expose young people to the career opportunities that exist in the state, so they can find their passion. “They are more success if they love what they’re doing,” Reynolds says. The Stem report says students involved in STEM programs scored an average of three percentage points higher in National Percentile Rank on the Iowa Assessments in mathematics and reading, and four percentage points higher in science compared to all students statewide.