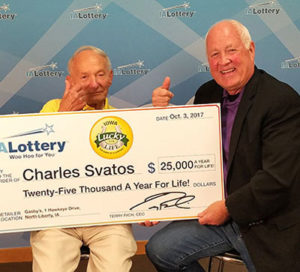 An Iowa City man had a decision to make after winning the “Lucky for Life” drawing.

Chuck Svatos won the drawing on September 25th that comes with a prize of $25,000 each year for the rest of his life. There’s a guarantee of a minimum of 20 years of payments, and there’s also a cash option of $390,000.

Svatos is 92 years old — he chose the cash option — and after taxes he nets $273,000.
Svatos says he’s been trying a long time to win at any lottery game and the most he’d ever won was around four dollars.

He plans to use the money to do some traveling, possibly to Hawaii or Switzerland.

Photo courtesy of the Iowa Lottery.