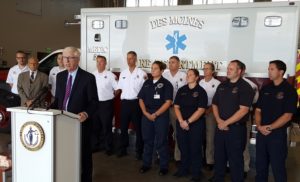 Iowa Attorney General Tom Miller says his office has reached a price reduction agreement with a leading manufacturer of naloxone, a lifesaving opioid antidote. Miller, at a news conference this morning at a Des Moines fire station, said the deal involves California-based drug maker Amphastar. “They have agreed to provide, to all public entities, a $6 rebate for any doses in the state of Iowa,” Miller said.

The two-year agreement took affect this week. A single dose of naloxone can cost between $23 and $48. “In the kind of volume we’re thinking about, a $6 rebate will make some significance,” Miller said. There are more than 900 EMS providers in Iowa.

Police officers often administer doses of naloxone too, as they often encounter Iowans who’ve overdosed on heroin or prescription painkillers. Dale Woolery is with the Governor’s Office of Drug Control Policy. “For instance, I’ve been told in Dubuque, so far this year, the law enforcement officers there alone…they’ve had one save a month,” Woolery said. “So, about 10 saves so far this year – those are lives.”

Prices for various brands of naloxone have risen dramatically in recent years along with the increase in heroin and opioid abuse. The Iowa Department of Public Health reports 180 people died in the state last year from opioid-related causes.