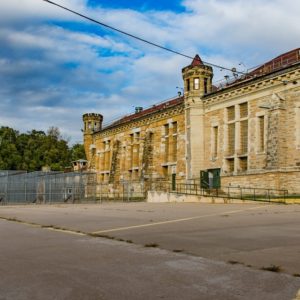 The old Iowa State Penitentiary in Fort Madison will be reopened this weekend for public tours of the 178 year old facility. The prison was shutdown in August 2015, when inmates were moved into a newly built maximum security prison.

Iowa State Pen Warden Patti Wachtendorf, who started her career as a correctional officer in the old prison in 1983, expects 2,000 people will take tours this Saturday and Sunday. “It really is educational, whether you like the historical piece of the prison or just seeing it as a piece of history. I think anyone who’s interested in the prison system will find it fascinating,” Wachtendorf said.

The old prison was established in 1839, seven years before Iowa became a state. The prison was previously opened for a tour back in May. The event was so popular that prison officials decided to offer more tours this weekend.

“We had probably 5,000 people who turned out, but we only actually put through about 3,500,” Wachtendorf said. “There were a lot of people still in line, but we had to stop the line – probably over 500 – because we just couldn’t accommodate them all. There were others out there on
social media who said they were going to (take the tour), but didn’t bother getting in line because of the turnout.”

The additional tour dates are being offered in an effort to raise money for a necessary and expensive report that will enable the Department of Corrections to eventually release the property. “It’s expensive – $150,000 to $200,000 – and we don’t have the money in our operating budget to pay for that,” Wachtendorf said. “So, all the money from the souvenirs and the tours…will go toward paying that report cost.”

Spots for the tours are being presold at $15 per ticket. Around 1,000 spots are available each day.

The future of the old prison is still unclear. “There’s been some private businesses, private investors asking about it, but we can’t do anything until this report is done,” Wachtendorf said. “Then, they’ll have the opportunity to know what is going to cost to do some upkeep and things like that before they make a good business decision.”

This weekend’s tours are free to children under 12, but they’re asked to bring a non-perishable food item for the local food pantry.

Tickets for the tour are only available online.