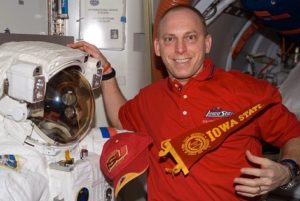 Between publishing two new books and surviving a hurricane, former astronaut and Iowa State University graduate Clayton Anderson has had a lot on his plate in recent weeks.

The 58-year-old Anderson published his first book, “The Ordinary Spaceman,” two years ago and now has two more books ready for launch. Both target younger readers. Anderson says kids who love to read can set themselves apart from those who don’t.

“If my book can help that, I’m very excited about that,” Anderson says. “The fact that it’s about space terms is kind of cool, and hopefully, it will excite young people. The illustrations are amazing. So, I’m hoping that it will actually make kids take notice of what it’s like to learn about space and maybe it will light their fire, like it did mine.”

His second book, “A is for Astronaut: Blasting Through the Alphabet,” is slated to be on bookstore shelves in March of 2018. Anderson says it’s aimed at young children who he hopes to encourage to read. Anderson’s third book is due out in June of 2018, entitled, “It’s a Question of Space.” He describes it as a teaching book aimed at young adults.

“The water got to about ten feet from our front porch,” Anderson says. “I was pretty worried, up in the middle of the night, carrying as much as I could upstairs. What’s amazing to me is just three miles to our south, the Dickinson Bayou overflowed and destroyed hundreds of homes and yet, we were spared.”

In addition to working at an American Red Cross shelter at his church, Anderson and his wife took in a family of four whose home was damaged by the hurricane. He says it will take years for the Houston area to recover.

“We still have piles of trash in the streets from people ripping up their sheet rock and carpeting and things,” he said. “Then, you had the hurricane that hit in Florida, and the one that hit in Puerto Rico. So, there’s a lot of people that need help and assistance, it just takes time,” he says. “The nice thing about Texas is we don’t wait for people to come and help us, we help ourselves.”

Both the Johnson Space Center in Houston and the Kennedy Space Center in Cape Canaveral, Florida, were in the paths of Hurricanes Harvey and Irma. Anderson says both space complexes received minimal damage.

An Ashland, Nebraska native, Anderson served two separate stints aboard the International Space Station. His first stay in 2007 lasted five months. In 2010, he returned to the station as part of a 15-day resupply mission aboard the Space Shuttle Discovery.