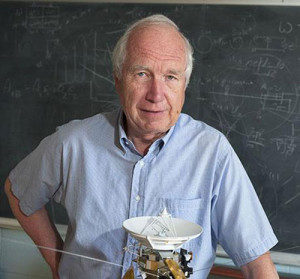 One of the University of Iowa’s most celebrated space scientists is reflecting back on today’s date, marking the 60th anniversary of the launch of the Russian satellite Sputnik I.

Don Gurnett was just 16 when the former Soviet Union rocketed that spacecraft into orbit, jump-starting the space race with the U.S. Gurnett says Sputnik sent a streak of fear through most Americans, himself included.

“Did it frighten me? Yes, I would say that would be true,” Gurnett says. “I can remember I used to work on University of Iowa projects at the Naval Research Lab in Washington D.C. and I remember being fearful that I would be in Washington when the Russians bombed Washington.”

Gurnett, who started his studies at the U-I mere weeks before Sputnik’s launch, says that Soviet accomplishment of orbiting Sputnik instilled more than just fear in his young mind.

“I would say it inspired me because I was tremendously interested in electronics, the rocketry,” Gurnett say. “In fact, it’s pretty amazing that I was working on homemade rockets in high school and not even a year later, I was actually working on real rockets down at Cape Canaveral.”

The 76-year-old Gurnett worked for many years with James Van Allen, the U-I scientist who helped successfully launch the first American satellite into orbit in January of 1958, a matter of three months after Sputnik.

“The University of Iowa was the center of space research, that’s where it began,” he says. “There was a tremendous expansion going on, trying to build more spacecraft and that sort of thing, and that expansion was largely taking place here. I was just fortunate to be at the right place at the right time.”

Gurnett has been involved in space science and physics at the Iowa City institution for nearly six decades, overseeing projects including the Voyager missions, Cassini and numerous others.