You are here: Home / Human Interest / The Whiffenpoofs are coming…to Clinton and Davenport 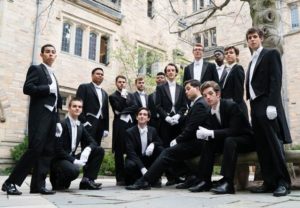 A 14-member chorus that bills itself as the world’s oldest collegiate a cappella group will open its traveling concert season this weekend with two Iowa performances.

The Yale Whiffenpoofs started in 1909. In this century, Yale students selected for the group began taking off a full year from college to travel and perform. Noah Strausser of Clinton, Iowa, is one of this season’s Whiffenpoofs.

“This might very well be the last chance that I have to do something amazing like this,” Strausser says, “to essentially tour the world with my band and that’s not exactly what I see myself doing for the rest of my life, but I have this opportunity now and I thought it would be a shame not to take it.”

Strausser is an architecture major at Yale. He and the other Whiffenpoofs will perform this Saturday night at the Zion Lutheran Church in Strausser’s hometown of Clinton.

“This will actually be our very first public concert of the year,” Strausser says. “That’s pretty exciting.”

It’s become a tradition to do a concert in each of the 14 Whiffenpoofs hometowns.

“It’s an amazing community that I’ve gotten to be a part of. Most of us didn’t really know each other all that well up until meeting a little over a month ago when we started rehearsing and it’s been every single day we have rehearsals or have a performance,” he says. “Every Monday we gather together at Temple Bar and Grill, which is the place where we were founded, and we sing there for people, including our alums.”

The 1965 Whiffenpoofs held a reunion at the bar on Monday of last week. The new group of Whiffenpoofs will perform at the Adler Theater in Davenport on Sunday afternoon. The popularity of a cappella groups has soared recently with the 2012 movie “Pitch Perfect” and “Pitch Perfect 2” in 2015 as well as the TV series “Glee”.  The Whiffenpoofs were featured on Glee’s 2013 season finale.