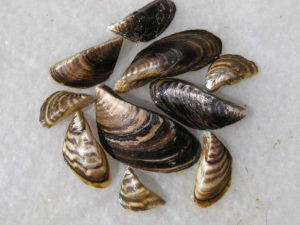 An invasive species has been discovered in Iowa’s largest natural lake.

Mike Hawkins, a biologist with the Iowa Department of Natural Resources, says the presence of zebra mussels in Big Spirit Lake has been confirmed in two ways.

“We had an individual from Spirit Lake that was out just enjoying a nice day on the lake, doing some wading along the shoreline, and happened to pick up a rock that had a juvenile zebra mussel on it,” Hawkins says. “…We also take water samples from Big Spirit Lake on a monthly basis looking for zebra mussel larvae.”

The latest sample “got a hit” for zebra mussel larvae in the lake water, according to Hawkins. Big Spirit Lake is upstream from the Okoboji chain. Zebra mussels were discovered in the Okoboji area back in 2012.

“I’m actually pretty surprised it’s taken as long as it has for this to happen or to move to Spirit Lake,” Hawkins says. “It kind of is an indication that we’re doing a pretty good job as a community in trying to slow the spread of these.”

The best way to stop the spread of invasive species like the zebra mussel is to clean the bottom of boats, canoes and kayaks once they’re out of a lake or stream — before the vessel is placed in another body of water. Zebra mussels form colonies on hard surfaces just below the water line, including boat propellers and swimming ladders. Hawkins says zebra mussels can “explode” in the bottom of the lake, too.

“Something on the order of 10,000 per square yard on the bottom,” Hawkins says. “They filter a lot of water. They take a lot of food out of the water that would normally go to other things and really change the food web in a lake system.”

There are some tools to deal with other invasive species, but Hawkins there is no way to control the zebra mussel population once it gets into a lake.

“At this point, there is no cure,” Hawkins says.

Big Spirit Lake sits a mile north of the city of Spirit Lake, along the Iowa-Minnesota border. Big Spirit covers nearly 5,700 acres, making it the largest lake among the Iowa Great Lakes.

(Photo courtesy of the Iowa DNR)