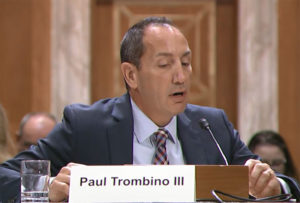 The former director of the Iowa DOT on Thursday said he is “eager” to help rebuild and repair the nation’s highways.

Paul Trombino III has been nominated to be administrator of the Federal Highway Administration and he was quizzed by members of a U.S. Senate committee yesterday.

“The nation’s highway system has long been the driving force for economic opportunity and success in the United States,” Trombino said, “and I am truly humbled at the opportunity to help advance the quality of life of Americans across the country through transportation.”

If — as expected — Trombino is confirmed by the senate for the job, he will take the lead in an agency that will be a key player in President Trump’s infrastructure goals. Trombino promised to find ways to streamline the permit process for highway and bridge projects that get federal funding.

“The key ingredient, from my perspective, is providing flexibility for states,” Trombino said. “…Every state is a little bit different. Their rural needs and urban needs are different.”

The confirmation hearing was livestreamed and the video is now posted on the committee’s website.

“What are other ways that we can fund our roads and bridges?” Ernst asked.

Trombino replied: “Obviously, the gas tax is a funding mechanism…There are a number of alternatives…different types of fees and other things that can be, potentially, on the table — especially as it comes to freight and other types of issues.”

But Trombino did not offer specific recommendations. He said those policy decisions will be made by congress.

Trombino worked for 17 years at the Wisconsin Department of Transportation before he became director of the Iowa DOT in 2011. Trombino left state government last year, at the end of November, to become president of a central Iowa engineering firm.