You are here: Home / Education / Finding ways to escape is focus of Fire Prevention Month 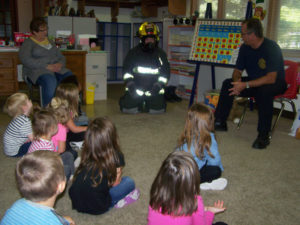 Fire Departments across the state are holding education sessions in October as part of Fire Prevention month.

Le Mars Fire Chief Dave Schipper says this year’s theme for fire prevention is “Every Second counts –know two ways out.” That means being aware of your surroundings and finding more than one exit in your home and other buildings.

“People are sometimes, I hate to say it, are like cattle. When they go one way, they go one way. A lot of people when you walk into your home or walk into your business or walk into a restaurant — if something bad happens, and that could be a fire, a robbery, anything — you tend to not realize there might be another way out and you tend to go the way you came in. And sometimes that’s right into harm’s way or right into danger,” Schipper.

He says when the days get colder, we sometimes make it harder to get out of our homes. Schipper. says when it gets cold people tend to tape up doors, put rugs in front of them or block them with furniture and they only use one way in and out. “And we want to make sure that there’s two ways that are very accessible to everybody. Not just in your home, wherever you go, do you take a look,” Schipper. says. “Can you get out a window if the window is your only opportunity. Can your kids get the windows open if they would need to. Those sorts of things.” Schipper. says they continue looking to reinforce the standard messages with kids — such as what to do when smoke or fire alarms go off.

Schipper says they talk to them about going outside when the alarms go off, and to stay outside and not go back in to look for someone or a pet, or something they’ve left inside. They also continue to stress the need to be safe around fire.

“We talk about not playing with fire. That fire is not a toy — it’s a tool. I think sometimes with kids’ curiosity or they are looking for something to do and it ends up being toy. We don’t want matches and lighters and those things being a toy,” according to Schipper. “And parents have to help us in that regard as far as keeping those things inaccessible.”

The Lee Mars Fire Chief encourages parents to visit with their children about the dangers of fire, and to rehearse a home fire drill.