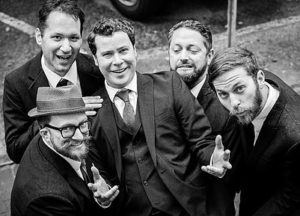 A musical act that defies genre will make its first-ever stop in Iowa next week, bringing an Iowa native home with his high-energy acoustic band.

Jared Hall is the keyboardist for Velvet Caravan, a five-member act that was assembled in Savannah, Georgia, from a wide array of musicians — hailing from as far away as Boston, Austin, Venezuela and Slovenia.

“We started just kind of molding all of our sounds together playing in this little restaurant in Savannah,” Hall says, “and it’s amazing how it all just started to work.”

The 40-year-old Hall, a native of Atlantic, Iowa, says it’s the diversity in their backgrounds that makes their sound so strong and unusual. Their influences include: southern rock, classical, jazz, gypsy, Latin and honkytonk.

“We began composing and writing our own material and next thing you know, we had what I like to describe as just this gumbo of great sounds,” Hall says, laughing. “To be funny, we kind of describe it as European Redneck Music.”

The quintet features the musicians on: guitar, violin, standup bass, percussion and keyboards. The eclectic sound often draws a very unusual collection of people in the audience, he says, from grey-haired seniors tapping their feet to break-dancing high schoolers.

“We see a lot of young people who are really into that kind of music,” Hall says. “There’s a big resurgence right now for gypsy-jazz, gypsy-swing kind of stuff. We see that all the way from someone who might appreciate jazz music, we see jazz fans out there, we see classical music fans out there. We even have quite a little hipster following going on.”