You are here: Home / Fires/Accidents/Disasters / Iowa remains among the top states for accidents with deer 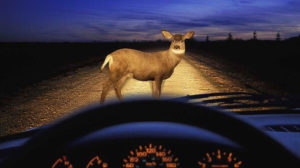 A new study shows Iowa remains one of the top states for deer collisions.

State Farm’s 2017 deer-collision study shows Iowa drivers have a 1-in-69 chance of hitting a deer, elk or moose. The data is based on insurance claims.

Drivers in West Virginia are at the greatest risk with a 1-in-43 chance of hitting a deer with their cars. Iowa is fourth on the list behind West Virginia, Montana and Pennsylvania.

Tyler Harms, a wildlife research biologist with the Iowa Department of Natural Resources, says his agency tries to maintain a “very careful balance” of the deer population.

“Because we do want to provide hunters with a quality hunt, but deer obviously have the potential to have some negative impacts as well to our citizens, such as deer-vehicle collisions, agricultural damage, and things like that,” Harms said. In the early 2000s, a deer study advisory committee set a goal for Iowa’s annual deer hunter harvest at 100,000 to 120,000 deer.

“We’ve met that goal…we’re actually toward the lower end of that goal and we’ve been there since 2013,” Harms said. “So, we’re meeting the goals established by that group and that goal is what we call ‘socially acceptable,’ it’s acceptable by all parties.” Iowa’s landscape contributes to the state’s high deer collision rate, according to Harms, as the deer are often leaving forests or brush in search of food.

“I think one other thing to consider too is Iowa does rank fairly high among the 50 U.S. states for the total mileage of public roads that we have,” Harms said. There were over 7,100 crashes between vehicles and deer reported to Iowa law enforcement last year, according to Harms.