You are here: Home / Health / Medicine / Iowa among a small number of states to cut deaths from strokes 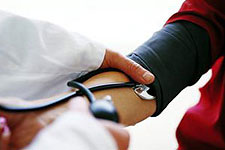 Controlling your blood pressure is one key to preventing a stroke.

The Iowa Department of Public Health was happy to find the state in the minority following a recent report from the Centers for Disease Control and Prevention (CDC) on the number of deaths from strokes nationwide.

DPH Health Systems Coordinator Terry Meek says the numbers in most states increased or held steady in the report — but not here. “Iowa is one of 13 states where we have actually continue decreasing the number of deaths due to stroke,” Meek explains. “Our rate has decreased 33 percent between 2005 and 2015.” Meek says the biggest factor in the Iowa’s ability to lower stroke deaths is linked to money it received from the CDC.

“That funding was called the Coverdale Stroke Program. And what it did was give us some money where we were able to call together a lot of partners and really work on some targeted activities to decrease stroke deaths,” according to Meek. That targeted program included education that highlighted the signs and symptoms of a stroke, and encouraged people to immediately call 911 at the first signs of stroke.

“The reason for doing that is important because there is medication that usually can be given if people get there (the hospital) soon enough that will preclude some of the major problems with stroke,” she says. They also strengthened the stroke identification and care at the Comprehensive Stroke and Primary Stroke Centers in Iowa, along with changing the EMS protocols to include immediate transfer of stroke patients to the closest and highest level of stroke center.

“So more people were getting to those compressive and primary stroke centers in Iowa quicker,” Meek says. The quicker treatment and transports led to fewer deaths. Meek says the state also developed the Iowa Stroke Registry with the University of Iowa to help track what is going on. She says you can help continue to improve its stroke death rate in Iowa by taking steps to prevent strokes.

“Eating a healthy diet, watching their blood pressure, making sure that they have regular checkups with their physician, where the physician can check for cholesterol, high blood pressure and other things that may be a problem — including diabetes,” Meek says.

For more information on heart disease and stroke visit the Iowa Department of Public Health’s website.