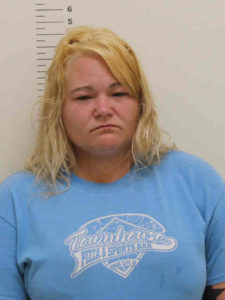 A man is dead and a woman is in custody after a shooting in northwest Iowa. Plymouth County Sheriff Mike Van Otterloo says it happened shortly after midnight, Friday morning, at a home in rural Akron.

Thirty-three-year-old Becky Hebert is facing charges that include second-degree murder. “The investigation allowed officers to learn that Hebert and the deceased had been arguing and they were having a disagreement prior to the shooting,” Van Otterloo said at a news conference Friday afternoon.

The identity of the victim, a man in his 40s, is expected to be released sometime Saturday. There were others in the home at the time of the shooting — believed to be Becky Hebert’s children. “There was a witness to the shooting…neither the witness or any others in the residence at the time were injured in any way,” Van Otterloo said.

Hebert was arrested over the noon hour on Friday in LeMars. Van Otterloo said police have been sent to rural Akron home in the past on domestic abuse calls. He also confirmed there was a no contact order in place for the individuals at that residence.