You are here: Home / Sports / Lanning and Kempt earn weekly honors from Big-12 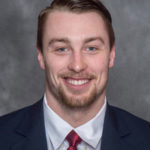 Lanning was sensational in Iowa State’s 38-31 upset win over No. 3 Oklahoma in Norman on Saturday. Playing on both sides of the ball, Lanning totaled 78 snaps (57 on defense, 13 on offense, eight on special teams).

Lanning, a native of Ankeny, Iowa, recorded eight tackles, a sack and a fumble recovery deep inside ISU territory to halt an OU scoring drive.

He currently ranks sixth nationally in tackles per game at 10.8, recording the most tackles in a game by a Big 12 player this season with 20 vs. Texas.

In his first career start, Kempt completed 18 of his 24 attempts through the air for 343 yards. He led four Iowa State touchdown drives that were 70 yards or more, including a 94-yard march.

Kempt, a native of Massillon, Ohio, had three touchdown passes were, all in the second half, helping ISU erase an 11-point deficit.