You are here: Home / Fires/Accidents/Disasters / U-I Hospitals saw increase in fireworks injuries after they were legalized 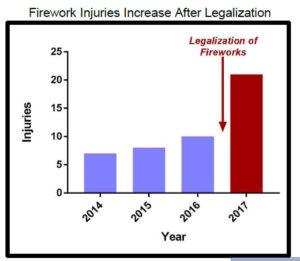 A review of the admissions at the University of Iowa Hospitals shows a big increase in the number of injuries from fireworks during the first legal period for their purchase this past June and July.

The University of Iowa Injury Prevention and Research Center conducted the review along with the surgical center, where doctor Kathleen Romanowski works. She says they compared fireworks injuries to the previous three years when fireworks were not legal.

She says 57% of the patients who were injured this year needed surgery, compared to 20% in the prior years. Romanowski says many of the new injuries happened to young people.

“There was a 26 percent increase in the number of patients under the age of 18 — there were five times more firework handlers who were under the age of 18 this year than in years past,” she says. There was also an increase in the number of injuries to bystanders from fireworks. The review found 21 people in the records that went to the hospital with fireworks injuries. Romanowski is Clinical Assistant Professor of Surgery, and says this is a one-year comparison for part of the state, but it gives them a place to start in looking at the issue.

“Part of why we put this out as a policy brief is just because we are interested in kind of seeing the full spectrum of what happens with this over time,” Romanowski says. “What’s really hard to know is we don’t know is the denominator . We don’t know how many more people were using fireworks this year — so the actual rate of injury may not be higher — but we are seeing more of them and they have significantly larger injuries than they have in the past.”

She says it’s hard to know how the fast roll out of sales after the law was passed figured into equation, as there was little time for safety campaigns. “There was a lot of confusion among people about whether their municipality was allowing it or not allowing it and what the rules were in their own municipality. Based on the way that the law was written, cities could opt in or opt out, and so that led to I think confusion among the public,” Romanowski says. “It led to confusion to a certain degree among the fire marshals in working with their own cities’ ordinances.”

Romanowski says in viewing just the numbers from the University of Iowa Hospitals, there needs to be more safety education done. “Focus on a safety campaign that alerts both firework handlers and bystanders of the hazards,” Romanowski says. “We need to try and create better statewide data so we can figure out if there’s things we can do better. If there’s areas of the state that are doing it better than others so that we can learn from each other.”

She says the safety campaign should also try to target the groups that saw some of the most injuries — such as underage men — and men overall. Romanowski says 68 percent of the patients were men before fireworks were legal, and that rose to 81 percent after fireworks were legal. The sale of fireworks had been illegal in the state of Iowa since 1938. Sales were allowed from June 1st through July 8th of this year. A second period also allows fireworks sales from December 10th through January 3rd.