You are here: Home / Crime / Courts / All but 19 emergency call centers have text-to-911 service 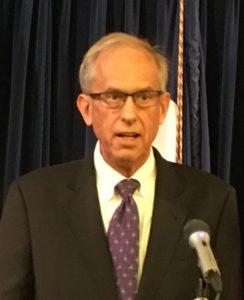 State officials say by the end of the year, all of Iowa’s 911 dispatchers should be able to respond to text messages.

Iowa Homeland Security and Emergency Management director Mark Schouten says text-to-911 service already has been used in Iowa when a call would have put someone in danger.

“We’ve had cases of a suspected intruder into a home, a domestic assault incident, a sexual assault in progress and a child who used it to report being kidnapped,” Schouten says.

Schouten, though, cautions a call to 911 is preferable because the dispatcher can get crucial information more quickly, like your location. Pin-pointing the physical address from which a text is sent is not yet perfected. If text-to-911 is not available in a city or county, a “bounceback” message will be sent.

“If it is working, you will shortly thereafter be entered into a texting conversation with a 911 dispatcher,” Schouten says.

There are 113 emergency call centers in Iowa. All but 19 of them are able today to accept text messages from at least one cell phone carrier today — and Governor Kim Reynolds says the remaining 19 should be converted by December 31.

“When fully operational, Iowa will have the third largest number of call centers equipped to receive text messages behind only California and Texas,” she says. “…Iowa was the first state in the nation to accept emergency text messages, back in 2009, so we continue to be a leader.”