You are here: Home / Health / Medicine / Governor asked for a conversation with Trump about stop-gap insurance plan 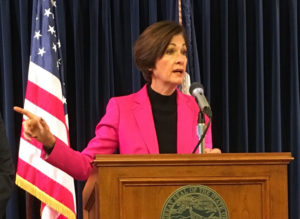 Governor Kim Reynolds today said her staff and the state’s insurance commissioner are in “constant contact” with federal officials considering Iowa’s plan to stabilize the individual insurance market for 72,000 Iowans.

“I haven’t spoken directly to the president,” Reynolds said during her weekly news conference. “I’ve asked for a conversation.”

Yesterday, the governor’s staff had a conference call with the head of the federal agency that will make the ruling on Iowa’s waiver request.

“So our indication is they’ve been very receptive,” Reynolds told reporters today. “They continue to work with us.”

According to a spokesman for the state insurance commissioner, if federal officials do not approve the state’s “stop gap” measure to fix Iowa’s collapsing individual insurance market, about 70,000 Iowans will face rate hikes of up as much as 85 percent for their 2018 health care policies. Chance McElhaney of the Iowa Insurance Division spoke with a state legislative committee this morning about the request for federal approval of Iowa’s “stop gap” plan.

“We have worked tirelessly,” McElhaney told lawmakers on the Administrative Rules Review Committee. “…We are knocking at the door and just waiting for approval.”

“Has the president softened his position from August, when he said: ‘Tell Iowa no,’?” Jochum asked.

McElhaney answered: “I don’t want to speak for the president.”

Governor Reynolds, who hopes to speak with the president, told reporters an hour later that it’s important to frame Iowa’s proposal as a “short-term” fix for people who are trying to buy individual insurance policies.

“I think it’s really important to refer to it in that manner,” Reynolds said, “because we still need congress to act to put in place a long-term solution.”

An eastern legislator is fielding “two or three phone calls” per day from constituents who are worried they won’t be able to buy or even afford an individual health insurance policy next year. Republican Representative Dawn Pettengill of Mount Auburn, the chairwoman of the Administrative Rules Review Committee, said those folks are depending on federal bureaucrats to give the go-ahead for the one-year plan.

“I just hope and pray that they come through,” Pettengill said.

The governor indicated many of the 72,000 Iowans who are in limbo are calling her office, too, pleading for help. The enrollment period for their 2018 insurance policies begins November 1.