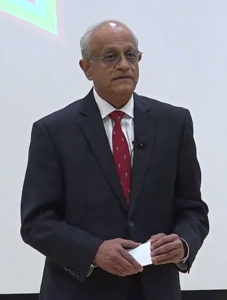 The first finalist seeking to become the next president of Iowa State University spokes about several issues during an hour-long open forum Monday.

Sonny Ramaswamy is the director of the National Institute of Food and Agriculture, Washington, D.C. He says the university has to think about helping the state’s economy along with teaching.

“We’ve got to make sure that not only is our promise to educate young people — but that there’s also opportunities for them to participate in the economic opportunities in the state itself,” Ramaswamy says.

He took questions after speaking for around 30 minutes and was told that some were not happy with the way the previous president handled some hiring – -and if he felt it was important to be transparent in handling his duties.

“The short answer is yes. We must really if we are going to be about that promise and purpose and preeminence, if we are not completely transparent, then we are not going to achieve that. Because faculty and staff would be suspicious of our intent,” Ramaswamy says. “And we collectively all of us have to be completely transparent, and that is the commitment that I would make.” Ramaswamy was also asked about how he would deal with state funding cuts. He says he has dealt with them before and when he was at Oregon State, he would ask the entire state for input on how to handle them.

“As an institution of higher learning as we call ourselves — and the bastions of knowledge and other things — we should not shy away from controversial topics just because it is not okay for the rest of the community,” according to Ramaswamy. But he says there also has to be some thought used when controversial issues are handled.

“Really we’ve got the right to do all of these things, but there’s also certain things that you and I would agree — if it’s obscene, if it’s hurtful, if it’s hateful, if it causes violence — that is something that you and I would have a conversation about and says okay, maybe there’s something else that we can do to answer the question to get to where you would want to go.”

The second candidate will visit campus today and meet with various groups. Pamela Whitten, the senior vice president for academic affairs and provost at the University of Georgia is the second finalist. She’ll hold a public forum from four to five p.m.