You are here: Home / Human Interest / Site of Villisca murders to be focus of Paranormal Summit 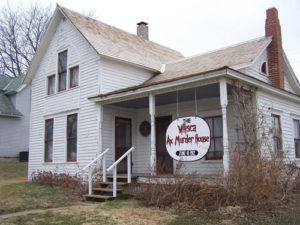 The house where Iowa’s infamous axe murders took place more than a century ago is one of the focal points of this weekend’s Paranormal Summit.

Two adults and six children were slaughtered in 1912 in the two-story house in the southwest Iowa town of Villisca. Dave Pares, who oversees the conference, says paranormal investigators will be presenting evidence from several mysterious locations.

“One of them deals with Villisca, the Axe Murder House,” Pares says, “and we actually have some really interesting imagery that has been collected.” Some believe the house is a hotspot for otherworldly activity because the murders were never solved. Pares says a second, undisclosed Iowa site will be featured at the summit, which draws the curious from all across the region.

Pares says, “Another investigation took place in a town in Iowa in an old building and we actually have thermal infrared pictures of a, literally, a ‘ghost’ that goes across the shelving units.” The Paranormal Summit is being held on Friday, that’s Friday the 13th, on the campus of the University of Nebraska – Omaha. Pares, an adjunct professor of geography and meteorology, is faculty advisor for the UNO Paranormal Society. He says they seek out logical, scientific, rational explanations for the various phenomena.

“We’re highly skeptical about everything and we actually use science to try to drive down into what’s the real deal here into the investigation,” Pares says. “Is it valid or we are just collecting a bunch of nothing?” At the annual summit, there will be a presentation at 6 P.M. Friday about the investigations conducted across the region in the past year and people will be shown the equipment that’s used. Afterwards, they’ll get the chance to use that equipment on what’s known as a “ghost hunt” on the Omaha campus.

Pares says, “The ghost hunt is going to begin at 9 o’clock and it gives a little more time to go to the various sites around campus that we’ve detected activity.” Believers and doubters are all welcome, he says. The event is open to the public and will be held at the C-PACS building at UNO. Admission is $10 and all proceeds go to the American Red Cross for hurricane relief.