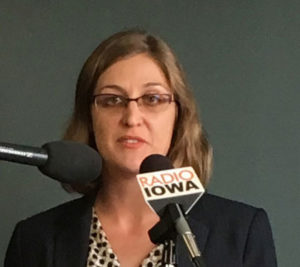 The Iowa ACLU has filed a lawsuit for several groups challenging the constitutionality of what’s known as the “ag gag” law.

ACLU legal director Ritta Bettis, says the law that was passed in 2012 threatens jail time for those individuals, news media, and advocacy groups who use undercover means to document, or even in some cases report on, questionable activities in agricultural animal facilities.

“Iowa was one of the first states to pass a law that specifically aims to protect the agricultural industry from undercover reporting and undercover investigations. And it spurred on a wave of legislation across the country — nine states currently have ag gag laws similar to Iowa’s,” Bettis says. She says they are confident Iowa’s law will be overturned, based on what has happened in other states.

“Federal courts have already struck down two of those as being unconstitutional and a violation of First Amendment rights, ” according to Bettis, “because the government is not allowed to create special protections where free speech does not apply based on content of viewpoint.” Supporters of the bill said it was needed to protect farmers from animal rights groups that send people who lie to get jobs in livestock confinements in order to commit abuses and videotape their actions. Bettis says the facilities would still be protected from crimes without the ag gag bill.

“All of Iowa’s generally applicable criminal laws would still apply when ag gag is struck down,” Bettis says. Bettis says the law has brought a halt to undercover investigations that could bring to light problems.

“In 2012 there were somewhere around 20 of these investigations. Since ag gag went into effect, there have been zero,” Bettis says. The lawsuit asks the federal court to declare that Iowa’s ag gag law is a violation of the U.S. Constitution, to to strike it down and enter an order blocking the state from enforcing it.

The ACLU filed the lawsuit on behalf of Bailing Out Benji, a nonprofit organization focused on protecting the welfare of dogs and puppies, Iowa Citizens for Community Improvement,the national Animal Legal Defense Fund, People for the Ethical Treatment of Animals (PETA), and the National Center for Food Safety